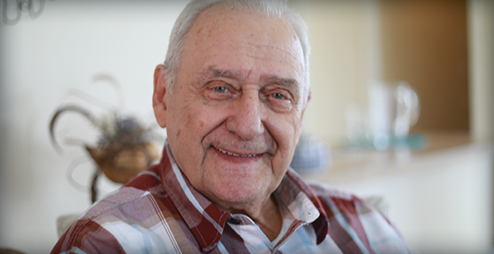 Ed Malm is a man of simple pleasures. A former carpenter running a business started by his grandfather over 100 years ago, he was pleased to hand over the business to his son. After his wife passed away, and after he underwent a few medical procedures, Ed decided he wanted to simplify his life even more. He was still living in the Dyer home his wife picked it out in the early 90s, but it was too much for him to deal with. Moving to a maintenance-free retirement community seemed like a good solution. But he just wasn’t sure where to move. He wanted to stay near friends and family, but should he stay in Northwest Indiana, or should he look for a new climate?

His grandson’s wife told him about a new community called Park Place of St. John, set to open in 2016. He was still weighing his options, but he went for a visit to see the construction and floor models, met some of the staff and future residents at events—and the rest is history. In January of 2017, just a month after the community opened, Ed moved in, and he’s so glad he did.

“Moving here is one of the best things I ever did,” Ed says, “and I’ve been happy ever since.”

And the best part about Park Place? Ed says it’s the staff. “From the food servers, all the way to the community manager,” he says, “anything you have any problems with, they will solve, or find a way to solve it, and they are very, very accommodating.”

Ed’s always had an easy time making friends, and his circle of friends grew when he moved to Park Place. He’s one of the first people to introduce himself to newcomers, helping people feel at ease in their new home with his great sense of humor. He also keeps himself active by going to the Park Place gym, riding the exercise bike and lifting weights. As a veteran, he’s also active in the many programs that honor military personnel throughout his five years at Park Place.

If you’re looking for the best in senior living, Ed advises you to look no further.

“Park Place is a fabulous place to move to,” he says. “Check out the different other locations and compare them. You’ll find out that Park Place beats them all.”

Learn more about the Park Place of St. John community.

Simply fill out the form below and we will be in touch soon.