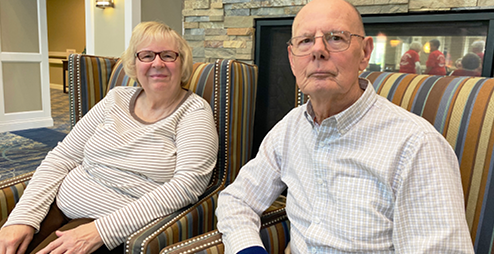 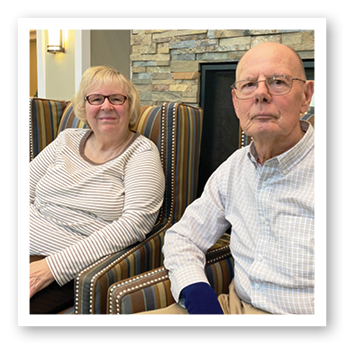 Herb & Kathleen Cleve met on a blind date, weeks before Herb was set to leave for Vietnam.

“We were actually set up on a double date with other people,” Kathleen explains, “but we both felt we were with the wrong person.”

They began dating, and the rest is history. “It was an adventure from the beginning,” Herb says.

Their adventure led to marriage and raising three sons in Northwest Indiana, but after the kids grew up and had families of their own, the Cleves were looking for an easier lifestyle. They looked at Park Place of St. John, but felt they were still too young to make that move, so they chose a rental property nearby. Unfortunately, just a couple years after moving there, the owners decided to sell.

“We definitely didn’t want to buy again,” Kathleen says. “So we came back to look at Park Place.”

“We found a good connection to the people here,” Herb says, and they both felt the Lord was leading them to make this move. After the decision, Herb received news that showed them they’d made a good choice.

“I was diagnosed with Parkinson’s” Herb says. “Along with a few other health issues, this meant it was wise to be somewhere with healthcare available if I need it down the road.”

It didn’t take long for Herb & Kathleen to settle in at Park Place. They love the exercise classes (“I’ve lost weight since moving here,” Kathleen says, excitedly), Wii bowling, Bible study, and other activities, and they’ve met so many new friends. They also appreciate the way the staff has stayed involved in their lives.

“They’re such caring staff,” Herb says. “They have such a sincere, Christian love for everyone here.”

But they also love the maintenance-free lifestyle.

“Life’s just easier here,” Kathleen says, laughing. “We really don’t have to do much of anything—except all the fun things!”

Come for a visit and experience the friendly community at Park Place of St. John for yourself.