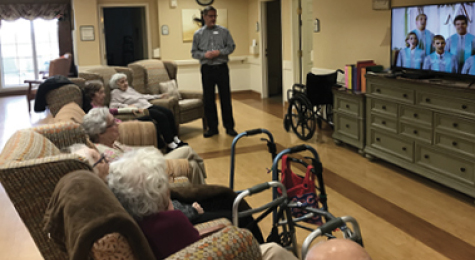 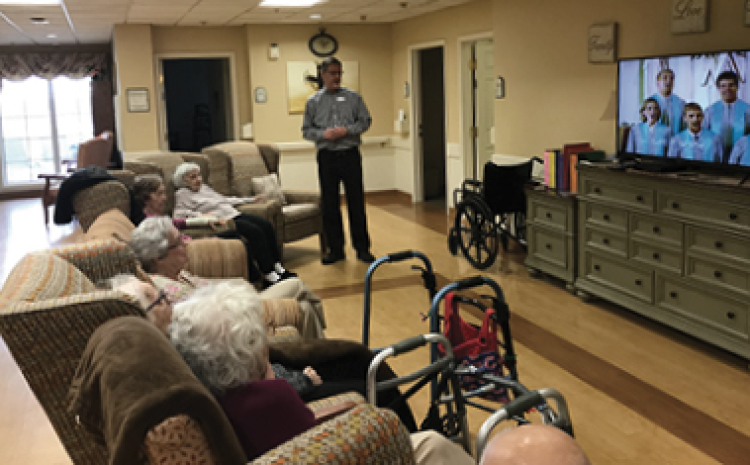 “Every day here is a gift,” Michael Kooy says, a wide smile spreading across his face. Michael is the pastor at Grace Community Christian Reformed Church in Oak Lawn, but he’s also the new chaplain at Victorian Village. Already several residents and staff have mentioned what a blessing he’s been to the community.

“He’s great,” says Wanda, a resident at the Victorian Courts townhomes. “He’s been a help to so many people.”

“He has the most patient, compassionate personality,” says Linda, a life enrichment staff member who works closely with him. “He’ll stop for everyone, even if he’s on his way somewhere. Residents, staff—if you need to talk to someone, he’s there. And it’s such a comfort.”

It’s hard to believe that Michael has only been at Victorian Village since July, but perhaps it’s because his Providence Life Services roots are dated several decades back.

“Years ago, my wife interviewed with Rich Schutt for an activities position at Rest Haven in South Holland,” he says. She later also worked as a resident aide there. Michael’s grandfather lived at Holland Home, and his grandmother lived at Rest Haven. “I was a frequent visitor at the South Holland communities, so Providence has been an important part of my family’s life for years.”

As for Michael’s career path, he worked at his father’s business for years before he felt led to full-time Christian ministry. After studying at a seminary, and settling into a pastorate, Michael heard about the open chaplain position at Victorian Village. It was a ministry he had some experience in, but one he was eager to learn more about.

One of the most popular endeavors Michael leads is a sing-along with residents in Memory Care. He credits the Providence Education team for helping him understand dementia, and how best to work with residents. “I can’t say enough about the training I received,” he says. “It was comprehensive and highly beneficial, and it helped shape the programming I’m using.” He loves to hear the residents and staff sing along to favorite Bible songs and hymns, smiles on their faces as they remember the songs they’ve sung since their youth. He also leads a Bible study for Memory Care residents, and the group has been growing in attendance steadily.

In addition to these singalongs, Michael spends time all over the entire Victorian Village campus. He leads activities such as Sunday afternoon Vesper services, Bible studies, prayer groups, lunch discussions, and more.

“Working with the staff here is a joy,” he says. “It’s a positive working environment, and there’s a sense of teamwork, a feeling that we’re all in this together. This kind of a job requires a great deal of commitment, and what you’ll find here is very dedicated people.”

He’s also noted that many people of different denominations and faiths attend his activities. “We might not agree on all things, but I want everyone to feel welcome,” he says. “I plan my studies so that all are included. We all need the encouragement you can only find in Scripture.”

And Michael certainly has been an encouragement to the residents and staff at Victorian Village. We’re grateful that he and all of our chaplains are a part of our ministry at Providence