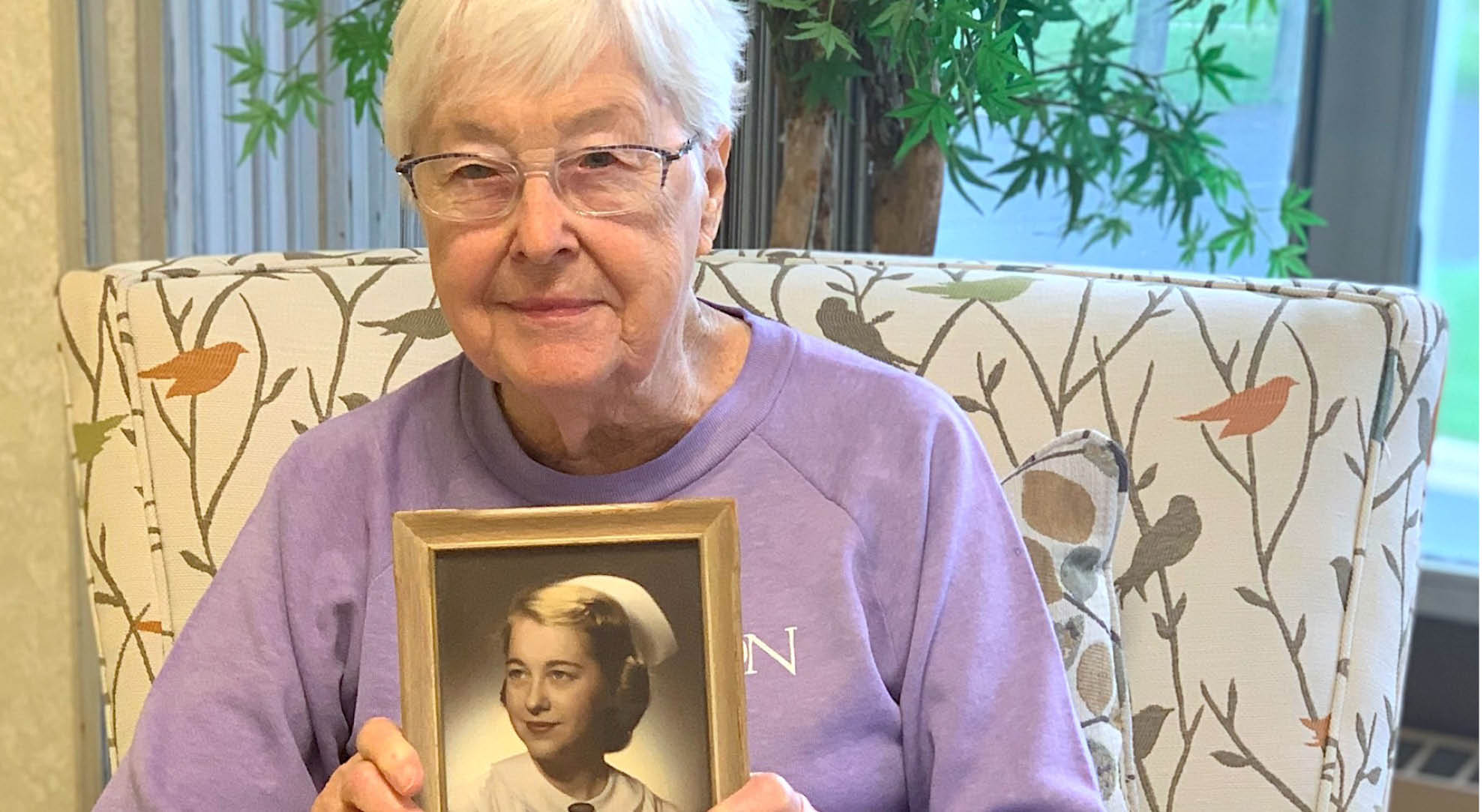 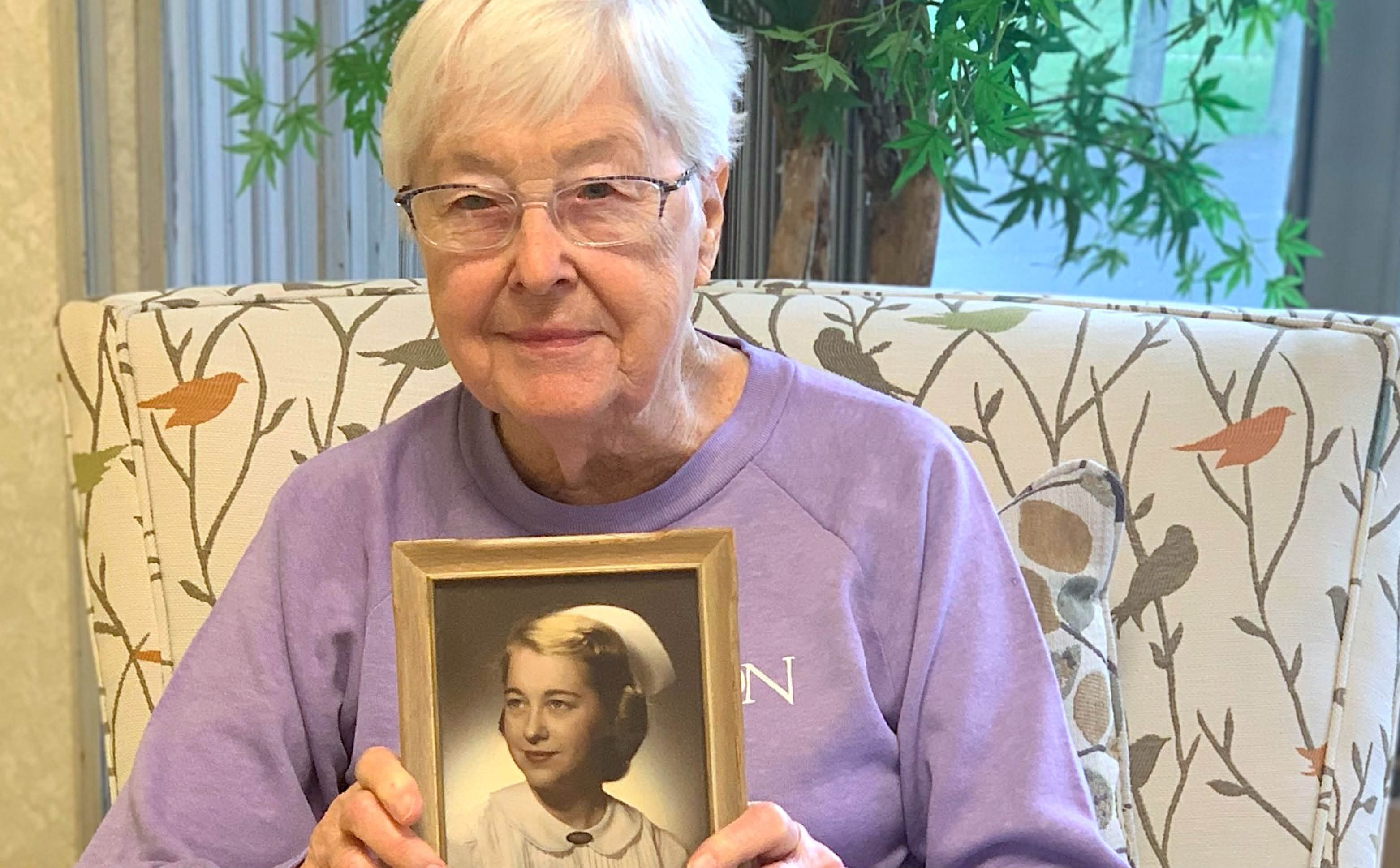 In honor of National Nurses Appreciation Week, meet Catherine Van Eck, who now lives in the Village Woods retirement community in Crete. Catherine was a nurse for 65 years, 50 years working in the United States and 15 years involved in short-term mission projects. Nursing runs deep in her family; her mother was a nurse, and many other people in her family followed suit, with four straight generations of nurses in her family.

“My mother didn’t try to talk me into being a nurse,” she says. “But she was my inspiration.” Her mother was the “town nurse” in their small South Dakota town. “She did it all: helped deliver babies, gave insulin shots, changed dressings, and took care of the dying.”

Catherine also didn’t have the education opportunities others in big cities had at their fingertips. “I went to a little school that didn’t even teach chemistry,” she says. “My school didn’t offer any science except physics. In those times, girls graduated high school and they either taught or did bookkeeping. I don’t know of any of my classmates or sisters’ classmates who went into anything else.” Against the odds, Catherine and both of her sisters went into nursing.

Incidentally, her brother proclaimed that he wasn’t going to marry a nurse. He did.

Catherine’s sisters studied in Grand Rapids, while she took nurses’ training in Chicago, where she met her husband. Her career as a nurse began at Children’s Memorial Hospital (now known as Lurie Children’s Hospital). After a short time, she transferred to Roseland Community Hospital and spent 47 years of her career there, taking emergency night call every night of the week. Being on call could be unpredictable. “Sometimes I’d go weeks with nothing, and other nights I’d be called twice in one night.” But with two young sons, the schedule allowed her to be an active part of her sons’ lives while they were young.

Conditions at the hospital were not what they are today. “When I worked at Roseland Hospital, it was not air-conditioned,” she says. “We melted in the operating room because we didn’t have any windows. We would rub ether on the back of each other’s necks to stay cool. We’d put folded Kleenex under our starched collars to stop them from irritating our skin.” She thinks especially of the patients and said we’d try to make them comfortable. “We’d give the poor patients baths at 2 in the morning just to cool them off.”

During Catherine’s time as a nurse, she witnessed many changes as medicine advanced. But what seemed to be most impactful was what she saw after seatbelt laws began. “It was amazing,” she said. “Accidents and fatalities decreased dramatically.”

Whatever she saw in hospitals here in America, she carried that passion for caring for people as she served as a volunteer surgical nurse overseas during 54 medical mission trips over the course of 40 years. She traveled to Honduras, the Dominican Republic, Belize, and Jamaica, and served in over 45 villages on these two-week trips. “We were all volunteers and paid our own way,” she says. “We would charge a minimal fee to help the patients feel ownership of their health, but if the person couldn’t afford it, the churches would help. We were always working in conjunction with the local churches and area medical staff.”

Her husband and all but one of her grandchildren accompanied her on various mission trips to assist however they could. She thinks it may have helped some of her granddaughters decide to become nurses, allowing them a glimpse of the medical field. “If you have an opportunity to go on a short-term project to see if you like it, do it,” she says. “Some people turn green when they see blood, so it’s good to find out before you pursue it in school.” She adds that sometimes non-medical people (like her husband) were able to assist in non-medical ways. Basically, if someone was willing to serve, there was a place for them. She says, “You don’t go on a mission trip unless your heart is in it.”

After 48 years of marriage, Catherine’s husband passed away. She moved to Village Woods and enjoys the life enrichment programs, the company of friends, and the visits from family. Catherine reflects on her career with gratitude. “I was really blessed to have a job that was so much fun,” she says. “I don’t envy the nurses today. So much bookwork. So much non-medical work instead of enjoying relationships with your patients. Such long shifts.” She especially admires all the nurses who have worked during the pandemic. “All the stuff they had to wear with COVID-19, wondering if your gown is tied tightly enough and your mask is just so—with COVID-19, you’re always on edge. Are you doing enough?” And as she has two granddaughters who are currently nurses, she hears some of the tough stories of what nurses go through.

When asked what advice she has for future nurses, she says, “Always keep your eyes and ears open. Don’t let criticism get to you. Our mission trip motto was always “Stay flexible and you’ll never get bent out of shape!”